Would it Help if I Sounded like a Man? 5 Techniques for Quiet Talkers 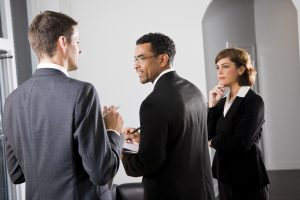 Many women think that a powerful voice is a low voice. Perhaps believing this to be the case, as women have stepped into more and more leadership positions in business, politics and the community, the average pitch of women’s voices in the western world has dropped significantly. On the average, women now speak only 2/3 of an octave higher than men instead of a full octave, which was the norm before 1945.

Therefore it may surprise you to learn that smoke detectors using a woman’s voice wake sleepers better than a bell, and that women’s voices are linked to better language development in children. Pretty powerful stuff! In addition, researchers at the University of San Diego found that powerful people develop loud, high-pitched voices rather than low-pitched, to use when they need to exert influence.  In fact, forcing your voice to a lower-than-natural pitch can be physically harmful. Maybe the power isn’t in the pitch.

What Can Women Do to Sound More Powerful

In the recent past, linguists started taking notice of “vocal fry” as a trendy speech pattern that started with adolescent girls. Now, the debate is on– are women judged by the sound of their voices while men are not; what can women do to sound more powerful; does any of this even matter? It does matter. The way we use our voices deeply affects the way others perceive of us. In the first 30 seconds that you speak, whether you like it or not, people make all kinds of judgments about you based simply on the sound of your voice– judgments about education, age, confidence, and authority­. It’s important to know that so that you have the ability to do something about it if you want to. Before you will be heard, you have to choose to BE heard.

Although it’s fair to say that the sound of a person’s voice should not be the indicator of whether or not their ideas get heard, that is wishful thinking. Yes, we should work to change this, but in the meantime, what does it take to be heard if no one seems to be listening? Being heard has much more to do with preparation and presence than with pitch or position.

Here are five steps to take to be heard in meetings: 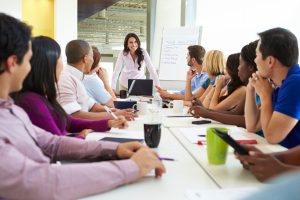 Rather than wait for the world to change, or for your voice to get lower or stronger or better, accept that women should and do have the power to speak up. In fact, that message is not just for women. If for any reason you feel that you are not being heard in meetings, you are not stuck with the voice you have, so start working on it. And while you’re at it, you can be an advocate for others who have trouble voicing their opinions in meetings. Bring them into the conversation. Be the one who creates space for others’ ideas.

The Case for Cracking a SmilePresence

The Rise of the Storyteller, and How to Be OneDelivery