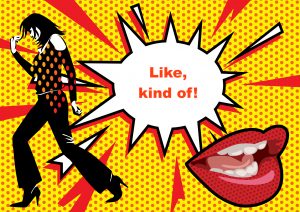 People use speech patterns of popular culture because they are, like, popular. Part of the fun of life is to copy what we hear said in films and TV because it is a way to share a common experience. Common experience is a great way to engage others. However, as my mom used to say, “Everything in moderation.” Today’s speech has become cluttered with “like,” “kind of,” and “sort of,” just as our highways have become cluttered with trash. Although many argue that these are just words and that they are a normal part of speaking, I argue that too much of this diminishes a person’s impact.

We all know that “kind of” doesn’t mean “absolutely.” Does it matter? To find the answer, ask yourself, “How much influence do I want?” On the dictionary.com blog post  that addresses the use of “like,” Jim commented that “There probably would not be a marble statue of him if Abraham Lincoln had said: Like four score and seven like years ago our fathers like brought forth on like this continent a new like nation, conceived in like liberty, and like dedicated to the like proposition that all men are created like equal.”

I agree though he would have been a trendsetter! Instead, the first recorded use of “like” as a filler word appeared 20 years later, in Robert Louis Stevenson’s 1886 novel Kidnapped: “’What’s like wrong with him?’ said she at last.” And thus began our increasing reluctance to take a stand.

Again, the real challenge with “like” is not that it is used, but how it is used. Its overuse seems to apologize for any conviction or strong opinions we have. In the example of Lincoln’s speech, Jim is really saying that when speakers want to inspire change but pepper their speech with words that are not strong, especially when they use a rising terminal (“up-speak”), they are less likely to be taken seriously. Your impact as a speaker depends on the alignment of the purpose/intention of your speech, the words you use and your delivery. As slam poet Taylor Mali suggests in his wonderful poem “Totally, like whatever, you know”, when you overuse words such as “like,”

(It’s) As if I’m saying,
don’t think I’m a nerd just because I’ve, like, noticed this; ok
I have nothing personally invested in my own opinions,
I’m just, like, inviting you to join me on the bandwagon of my own uncertainty

If you notice words such as “like,” “sort of,” and “kind of”, like, creeping into your speech, or that of your children, here are some ideas for sort of kicking the habit (see what I mean? Will this help you kick the habit or not?).

Ideas for creating the habit:

It takes anywhere from three weeks to 8 months to break a habit, depending on the complexity of it. Make a commitment to change the way you speak and keep after it by exercising the new skill for at least a month. It will  make a difference in how others  perceive of you, which, in turn, will increase the impact of your communication.

For more on this, please see: 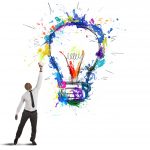 How To Water Your VoiceVocal Health