Do You Tic When You Talk?

When I was in high school, I had a French teacher who grunted between every few words; little pig-like grunts would come from her mouth even when she was not speaking. It was awkward for us, to say the least, and she was the brunt of many jokes. However, she was either completely unaware of this tic or did not know how to stop it.

Most people have seen physical tics such as head jerks, or hands that pull at clothes over and over when speaking, but there are also phonic tics. Phonic tics are involuntary sounds produced by moving air through the nose, mouth, or throat. Some call them vocal tics, but they could be a sound made when you breathe or a click of the tongue or a throat clearing. The extreme of phonic tics is Tourette Syndrome, but most are not that severe. For most of us, tics appear when we least want them to– when we are in front of a group. Tics are associated with anxiety. (Naturally, I now have much more compassion for my French teacher because I realize that we must have scared her to death!)

People with tics report that they first feel an irresistible urge to clear the throat, or grunt, or whatever the tic is followed by the tic. Even though it feels like you can’t stop yourself, it is possible to get rid of most tics as you do other habits,  through awareness and practice; if you are aware of it you can stop it. Some tics, of course, are more deeply ingrained, more about the anxiety of being in front of others, and may take longer to conquer. Either way, if you have a vocal tic, eliminating it will increase your credibility, your comfort, and the audience’s comfort as well.

Here’s how to eliminate vocal tics 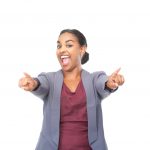 How To Be More ExpressiveDelivery 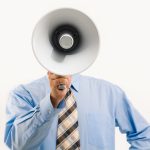 Your (Executive) Presence is RequiredPresence